Posted on September 16, 2018 by Philip Colligan

We are delighted to announce that the Cambridge Apple Day will be back for its 9th year on Sunday 7th October 2018.

As usual it’s the time of year that we realise that we forgot to write up the blog for the last year’s event, but thankfully some of our more diligent apple day revellers posted photos and videos from last years event, including this impressive time-lapse from Sophie of a pressing:

It was great to see the kids getting really involved into the process – even setting up the press themselves and leaving more time for the grown-ups to do the really important stuff. 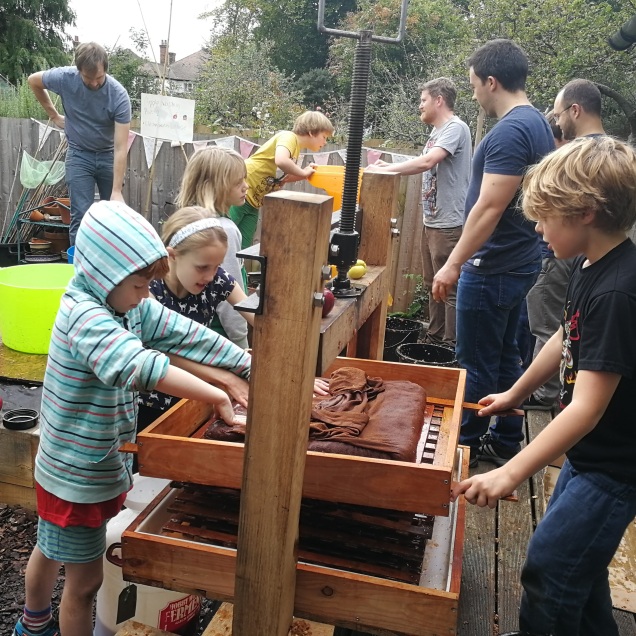 2017 was another bumper year, we pressed an estimated 110 gallons of juice. Some of this was consumed as delicious juice on the day or taken away in bottles. The rest was turned into cider, as you can see:

The biggest challenge has been what to do with it all! Happily, there was a street party on Flamsteed Road this year which saw off a good couple of barrels:

Anyway, back to this year. Details will follow in the coming weeks. For now, hold the date in your diary and start spotting apple trees for scrumping. Apple crops look to be a bit patchy this year due to the hot weather, many of our usual haunts have had very poor crops. So keep an eye out for any promising trees with apples that haven’t fallen yet.

Apologies to the many people who’ve asked, but the Cambridge Apple Day is still an invite only affair.  We currently hold it in Phil and Jane’s back garden, and while we want to open it up to the public one day, we aren’t able to do that yet.

Looking forward to more appley goodness on the 7th!

This entry was posted in apples, cider. Bookmark the permalink.